The Incidents of 3 Sahabah with Rustam 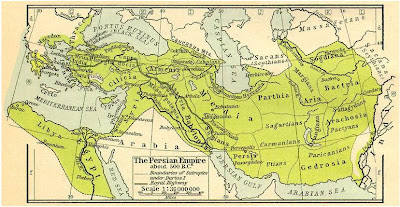 Hadhrat Muhammad, Hadrat Talha, Hadhrat Amr and Hadhrat Ziyaad all reports that Hadhrat Sa'd bin Abi Waqqaas sent for Hadhrat Mughiera and few others and said to them, "I intend sending you to those people (the Persians). What have you to say about it?" They all said in one voice, "We shall do as you command and do no more. If a situation arises concerning which there are no directives from you, we shall look for what is best and most beneficial for the people and discuss that with them."

Hadhrat Sa'd then said to them, "Such is the behaviour of intelligent and experienced people. Go and get ready." Hadhrat Rib'ee ibn Aamir then said, 'The non-Arabs have their own peculiar ideas and etiquette and if we all go to them, they will feel that we are placing them on a pedestal. Do not send more than one person." When the other agreed with this, Hadhrat Rib'ee volunteered to go first. Hadhrat Sa'd then sent him and Hadhrat Rib'ee left to meet Rustam in his cantonment.

However, the sentries at the bridge stopped Hadhrat Rib'ee and sent a message to Rustam, informing him of the arrival. Rustam consulted with some leaders of Persia, asking, "What are your opinions? Should we boast only about our military superiority or should we make them feel worthless (by displaying our wealth and riches)?" They were all unanimous about making the Muslims seem worthless, so they made a display of their opulent commodities, they laid out exquisite carpets and cushions and spared nothing in their effort.A golden throne was made for Rustam and he dressed most lavishly. Expensive rugs and cushions woven with gold thread were also laid out.

Hadhrat Rib'ee arrived on his short, long-haired horse, carrying a shining sword. His scabbard was a pouch made of old cloth and his spear was tied with a leather strap. He also carried a shield made of cow's hide, the face of which had round patches of red leather that resembled bread. He also carried his bow and arrows with him. When he came to the court and reached the first of the rugs, he was told to alight from his horse. He however rode the horse on the rug and alighted only when it stood properly on the rug. He then tore up two cushions, pierced the horse's reins through them and tied the horse up.

All this while, the people there were unable to stop him. Hadhrat Rib'ee knew well that they were displaying everything to him to make him feel inferior, so he wished to get the upper hand over them (because of which he did what he did to show them that their wealth held no attraction for him).

The armour Hadhrat Rib'ee was wearing flowed over him like a dam and he wore the hide of a camel over it like a cloak. He had made a hole in the hide, drew it over his head and tied it about his waist with a cord made from plant fibres. Hadhrat Rib'ee was amongst the hairiest of all Arabs and his hair was tied with the leather reins of a camel. His hair was separated into four lock; that stoodlike the horns of a mountain goat.

The people told him to put down his weapons, to which he replied, "I have not come here by my own accord, so you cannot instruct me to drop my weapons. It is you who have sent for me, so if you do not want me to come as I please, I might as well go back." When this was reported to Rustam, he said, "Allow him in. He is but one person."

Hadhrat Rib'ee arrived, leaning on his spear that had a sharp head. He took short steps and tore the rugs and cushions (with the spear) as he walked. There was no cushion or rug that he did not. ruin, leaving them all torn and tattered after him. When he came up to Rustam, the sentries surrounded him. Hadhrat Rib'ee then sat on the ground and stuck his spear into the rug. "What made you do that?" they asked, Hadhrat Rib'ee replied, "We do not like to sit on those decorated places of yours."

The narration then continues, as has been quoted in the chapter discussing the Da'wah that the Sahabah gave during the Khilaafah of Hadhrat Umar. The narration proceeds to state that Rustam said to the courtiers (when they criticised Hadhrat Rib'ee's appearance), "Shame on you! Do not look at clothing but rather look at the prudence, the speech and the personality. The Arabs care little for clothing and food but are covetous about their lineage. They do not dress like you and have different tastes."

The Persians then approached Hadhrat Rib'ee to have a look at his weapons, regarding them to be inferior. He said to them, "Do you wish to show me your military prowess and I shall show you mine?" He then drew his sword from his cloth pouch and it flashed like a flame of fire. "Sheath it!" they called out (in terror). He then sheathed his sword. They then fired arrows at his shield while he fired arrows at theirs. Their shield was shattered while his shield remained intact. He then addressed them saying, "0 Persians! While you have given great importance to food and drink, we treat it with little ceremony." He then went back after giving them time (three days) to consider their position.

The following day, the Persians sent a message saying that they wanted the same person sent back to them. Hadhrat Sa'd however sent Hadhrat Hudhayfah bin Mihsin. He also arrived in simple attire as Hadhrat Rib'ee wore. When he also came to the first rug, he was told to alight from his animal. He however said, "That I would have done if 1 had come to you for my own needs. Ask your king whether I have come for his need or for mine. If he says that it is for my own need, he is lying and I shall return and leave you alone. However, if he says that it is for his own need, then I shall come as I please.".

"What brings you people here?" Rustam asked. Hadhrat Hudhayfah replied, "Allaah has favoured us with His religion and shown us His signs until we realised that it was the truth even though we had been opposed to it. He then commanded us to invite people to one of three options. We shall accept any of the three options they choose. Either you accept Islaam and we shall leave you alone. Otherwise, you may choose to pay the Jizya and we shall stand in your defence whenever the need arises. The next option is battle." "Do we have a few days to enter into an agreement?" Rustam asked. Hadhrat Hudhayfah replied, "You have three days which started yesterday."

When Rustam received from Hadhrat Hudhayfah nothing more than he got from Hadhrat Rib'ee , he sent him away and addressed his companions saying, "Shame on you people! Do you not see what I see? The first man came to us yesterday and defeated us on our premises. He degraded what we were enamoured with, stood his horse on our opulence and even tied his horse to it. He took a good omen from what he did and returned to his people, taking some of our soil with him. That was apart from his superior intelligence. Today this other man arrived and stood over us, also taking a good omen from it by taking our land after expelling us from it." Rustam however infuriated the others and they also infuriated him (by refusing to listen to him).

The following day, the Persians again asked for someone to be sent to them and this time, Hadhrat Mughiera bin Shu'ba ; was sent.


Another narration continues the narrative, staying that when Hadhrat Mughiera ached the bridge to cross over into Persian territory, he was halted by the sentries who first sought permission from Rustam to allow him in. The Persians, however, did not leave out any of the pomp and ceremony in their effort to make the Arabs feel inferior. Therefore, when Hadhrat Mughiera arrived, the Persians still boasted their opulence. They wore crowns, garments woven from gold threads and carpets were laid out the distance that an arrow travelled. The only way to reach the king was over this length of carpet.

Hadhrat Mughiera who also wore four locks of hair walked up to Rustam and sat with him on his throne and cushion. The courtiers sprang up, grabbed at him and brought him down, even hitting him mildly. Hadhrat Mughiera addressed them saying, "We have always heard that you people were intelligent, but I do not think that there is any nation more foolish than you. We Arabs treat each other as equals and do not make slaves of each other unless circumstances of war demand. I had always thought that you people also practice equality amongst yourselves just as we do. Rather than doing what you just did, it would have been better if you just told me that some of you prevail as masters over others. If sitting beside Rustam was not palatable to you, we will then not do so again. 1 would have not come to you had you not sent for me, but today I can see that your sovereignty is soon to vanish and that you will be vanquished because no power can survive with such a way of life and with such a mentality."

(Hearing this) The common people shouted, "The Arab is right!" To this, the leaders remarked, "By Allaah! He has made a statement towards which our slaves will always be referring us! May Allaah destroy our elders! How foolish were they to regard these people (the Arabs) as insignificant (they should have realised the threat and wiped them out a long time ago) ..." The narration then continues to mention the questions Rustam asked and the replies Hadhrat Mughiera gave him.